You’re now subscribed to our newsletter.
Look out for a welcome email in your inbox!

Your basket is empty!
Click on this link to start shopping!

1. How many types of bees are there in Australia?

Australia has over 1,600 hundred species of native bees, when you compare that to 828 bird species within Australia it really is amazing! They come in a startling array of colours and range from 2 to 24 mm in size. Australian native bees can be black, yellow, red, metallic green or even black with blue polka dots! They can be fat and furry, or sleek and shiny.
The commercial honey bee is not native to Australia, they were introduced from Europe in 1822.

2. Why are pollinators important?

We need pollinators, like bees, to help us grow our food and flowers. Of the 352,000 flowering plants and crops nearly 90% rely on pollinators for reproduction. Australian native bees are able to pollinate many fruits and vegetables, including tomatoes, watermelon, passion fruits, strawberries and mangoes.
Bees are having a tough time around the world. Weather events such as flooding, drought and unseasonal hot periods reduce the number of flowers bees rely on, and bushfires destroy habitat. Threats such as varroa mite (a parasite) and widespread use of certain types of pesticides and land clearing are linked with the collapse of bee colonies and a reduction in their ability to find food sources. It’s not a great time to be a bee.

No. Native bees have a totally different life cycle to honey bees (natural host of varroa) so they can’t parasitise solitary bees or stingless bees.

Australia has over 1,600 species of native bees and only eleven of these species are stingless! These are the social native bees, Tetragonula and Austroplebeia.

All the other native bee species in Australia can sting. Most are too small to deliver an effective sting and Australian native bees are not aggressive. However, if one of the larger native bees is picked up or trodden on, it could be quite capable of stinging.

Most stings are not as painful as those of a bull ant or paper wasp and last only a few minutes. However, a native bee can sting more than once and it is possible to be allergic to the sting of a native bee. So please treat native bees with respect.

5. How long do native bees live for?

Depending on the species, most adults live for about six weeks. Developing larvae / pupae can emerge in the same season they were laid or continue to develop and emerge the next year. They are safely tucked away in the nests within the bee hotel. Again, timing depends on the species.

6. What time of year do they generally hatch?

Depends on the species and location (state / climate). Most cavity nesting bees begin to appear in mid to late spring and can be active until late autumn or even early winter if the weather is warm enough.

7. Where do native bees live? 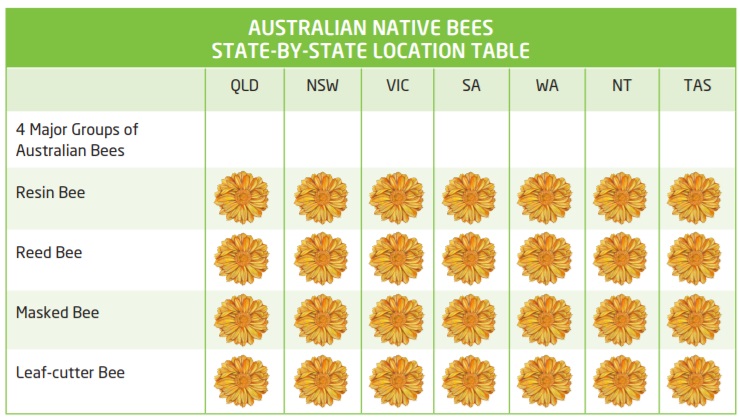 8. How many babies does a bee have?

It depends on how long the adult lives, how much food is available (floral resources) and availability of nesting habitats. Native bees don’t produce as many offspring like honey bees do, research indicates that they produce approximately a few dozen.

9. Do the mother bees live in the bee hotel at all or is it just a nursery

In most cases, the mother bee (a fertilised female can be called a queen, but the most accurate term would be a Gyne) lives, rests and shelters in the nest until it is filled with brood and then she has to move on. However, reed bees live in very small colonies with 3-7 females which help rear brood. They stay in that nest.

Males are an important part of the process, but only at the beginning. They can mate with several females and do so either on the wing or on flowers. The male bees hang out at night in ‘male congregations’ (image of one species below).

They rest, but they have no eyelids so can you sleep with your eyes open. This is actually something that is debated, and we don’t actually know. But they do rest.

12. What happens to the bees when it rains? Where do they go?

Females in the nest, males in foliage, under leaves. Like many insects.

13. It is possible to have stingless native bee hive, a bee hotel and honey bees in one garden at once?

14. How far around the hotel do the bees forage?>

They think their flight range is about 300 metres, but they can move on from place to place so are not ‘tied’ to a certain nest. If there is no food, they’ll move on

Interested in a Bee B&B Hotel but you aren’t a registered Primary School?

We have a limited number of Bee B&B Hotels available at Weleda (for a very small fee).

SIGN UP and get 10% OFF your first online order*
Thank You!

You’re now subscribed to our newsletter.
Look out for a welcome email in your inbox!

*Free standard delivery within Australia.
Please be aware we are experiencing delivery delays with the increase in demand of our postal network.
Sitewide Sales exclude gift packs, sets, duos and already discounted sale items.
Product added to basket
Unfortunately this product is currently out of stock
{{product.badge}}